Two infected surgical incisions or SSI on an ankle joint were treated topically with Dehydroascorbic Acid (DHAA) - Vitamin C serum. The infection was brought under control and healed completely in four weeks without the need for any other medications. This report covers the first 14 days of treatment with a follow up at 46 days for the "after" photos. Both wounds were classified as deep incision surgical site infections (SSI).

At presentation, around five weeks after surgery and five days after discharge from a 28 day stay in hospital the subject had a badly infected ankle despite being treated with multple IV and oral antibiotics pre and post surgery for the duration of her hospital stay.

Immediatley prior to discharge from hospital the subject reported both ankle wounds fell apart during removal of the sutures, both wounds were discharging pus and obviously infected, little if any healing was evident. The triage nurse informed the subject to stay until a doctor could view the wounds, after waiting four hours without seeing a doctor, the subject unwisely self discharged.

At presentation five days later the subject was in considerable pain and unable to walk unaided and reported the infection was progressing rapidly. Considerable swelling, malodorous infection, red and purple blotches and an inflamed line progressing further up the leg towards the knee were evident. The wounds had no granulation or other signs of post operative healing.

The photos in the video below show the infection immediately prior to the commencement of the DHAA vitamin C treatment through to six weeks later.

The surgery had required two incisions into the ankle, and both entered the same joint capsule from different angles. One incision was on the top of the ankle, the other from the outside edge. It was possible the two infected wounds were in fact one infection that passed completely through the foot via the joint cavity, discolouration and swelling were evident on the inside of the right ankle opposite the infected surgical wounds.

At the time of presentation the foot and leg were bathed* in diluted Dehydroascorbic Acid (DHAA) Vitamin C serum before applying the serum directly to the wounds and red inflamed areas. The wounds were then bandaged.

We also gave a bottle of liposomal vitamin C to be taken orally as the infection appeared to possibly be too deep for the topical DHAA serum to get to all of it.

The subject reports the rapidly advancing infection was halted in less than 24 hours, and was in obvious retreat by the next day with all red splotches and the red line from just above the ankle to the knee no longer visible. Swelling had reduced considerably, by the third day the first signs of healing were noticeable. She also reported immediate pain relief from bathing the foot and leg with DHAA Vitamin C Serum, deeper pain symptoms began diminishing after two days.

Although instructed to get to a hospital ASAP the subject ignored this advice after seeing the obvious signs of recovery the next day.

Treatment continued at once per day for four weeks.

No other treatments or antibiotics were used. Therefore the reversal of the infection was either spontaneous, or was solely due to the Vitamin C treatments described above.

Before and After SSI Photos

The before photos are around five weeks post surgery, it is clear that little wound healing has occurred in the five week period since surgery, the after photos are at 14 days and 46 days after the commencement of the Vitamin C - Dehydroascorbic Acid treatments.

Most of the swelling has resolved after 14 days. Redness and white wound edge in the before photo has changed to pink, some wound closure has occurred. New flesh/skin growing in the top quarter of the wound has almost bridged the gap between the wound edges after 14 days treatment. The lower part of the wound still had a moist slough coating but this had not prevented the new skin/granulation from forming. The surrounding skin on this lesion is less red than the top incision. The wound was fully healed at four and a half weeks according to the subject. Considering the width of the wound and severity of infection, the lightness and quality of the scar tissue after 46 days is remarkable. 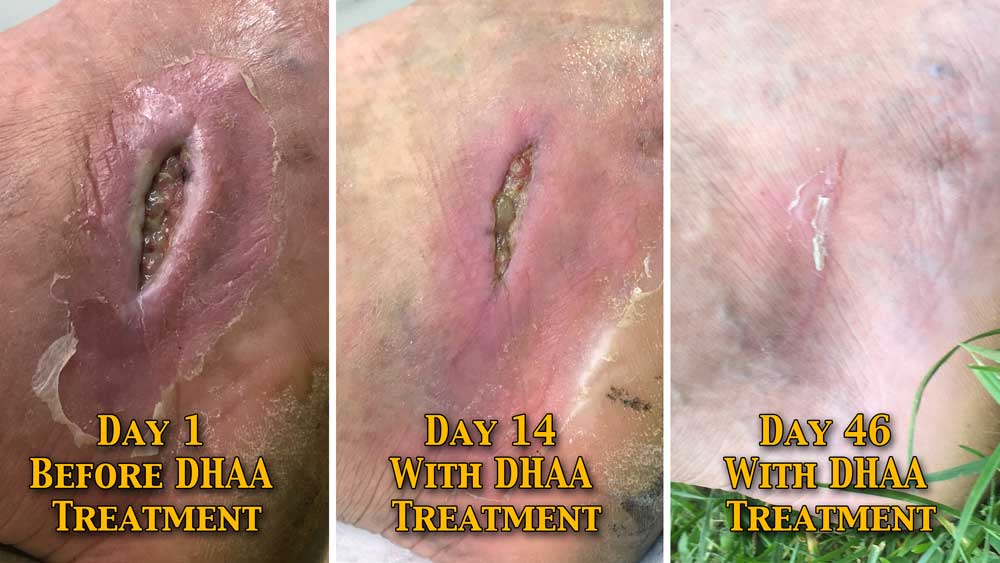 The wound shows a significant improvement over 14 days, associated swelling and erythema had largely resolved. Some redness and mild inflammation persists. Rolled wound edges have flattened. The top and bottom tails have knitted properly. A hard scab had formed, making it difficult to determine what was happening beneath the central wound. The wound was fully healed at around four weeks according to the subject. At day 46 the scar tissue looks strong and healthy. 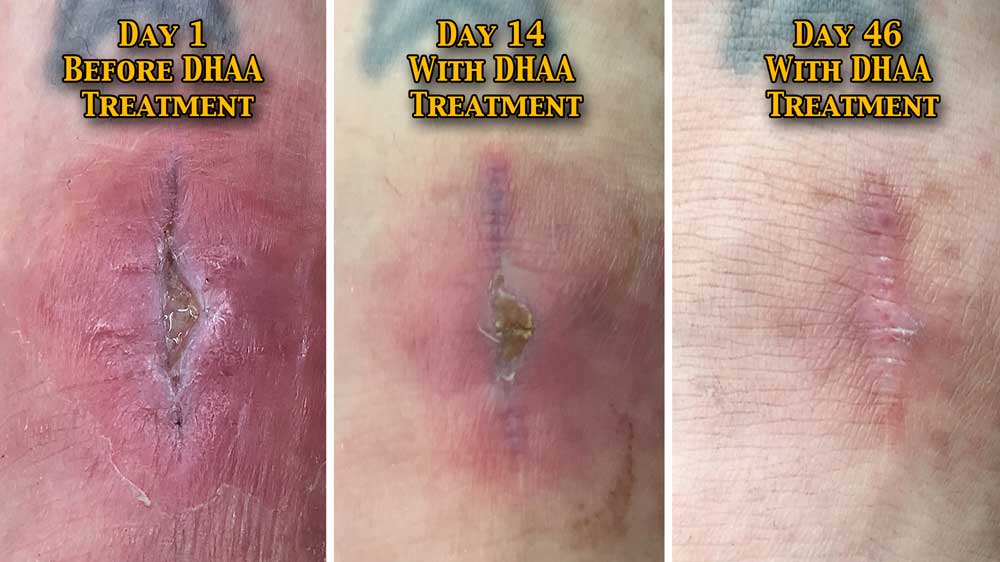 On the side of the ankle opposite the largest infected incision swelling and redness can be seen on the ankle extending downward to just above the sole, backwards around to the Achilles tendon area, and forwards almost to the base of the toes. Intermittent superficial patches of erythema extend up the calf and shin to a point near the knee. Considerable swelling is evident on the top of the foot and side of the ankle. 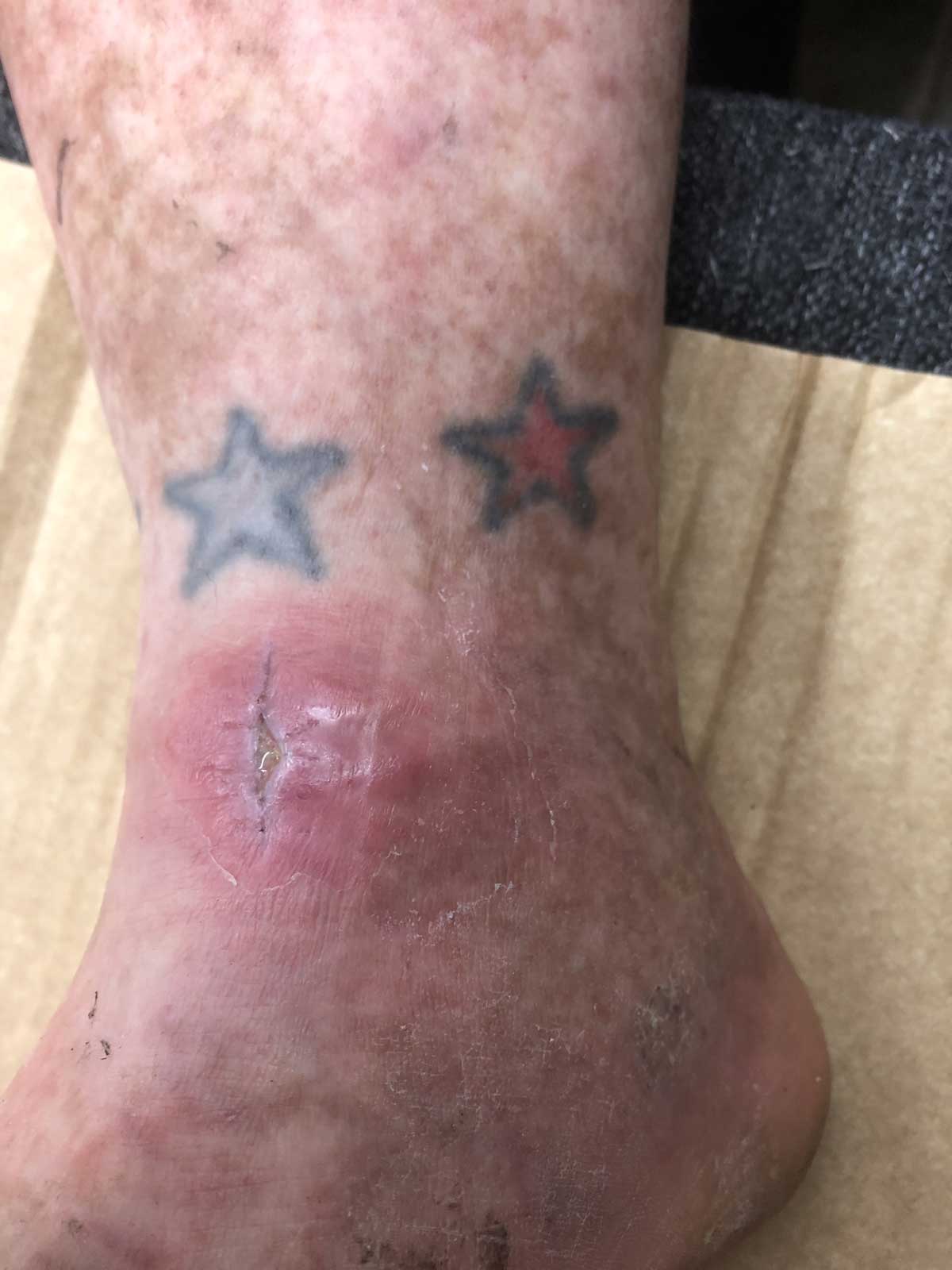 Unhealthy tissue extends 15 to 20mm beyond the wound border on the side of the larger wound. Discoloration spreads to near the sole, around to the Achilles tendon, and towards the toes. Superficial red blotches extend up towards the knee. Considerable swelling is evident on the top of the foot and both sides of the ankle. 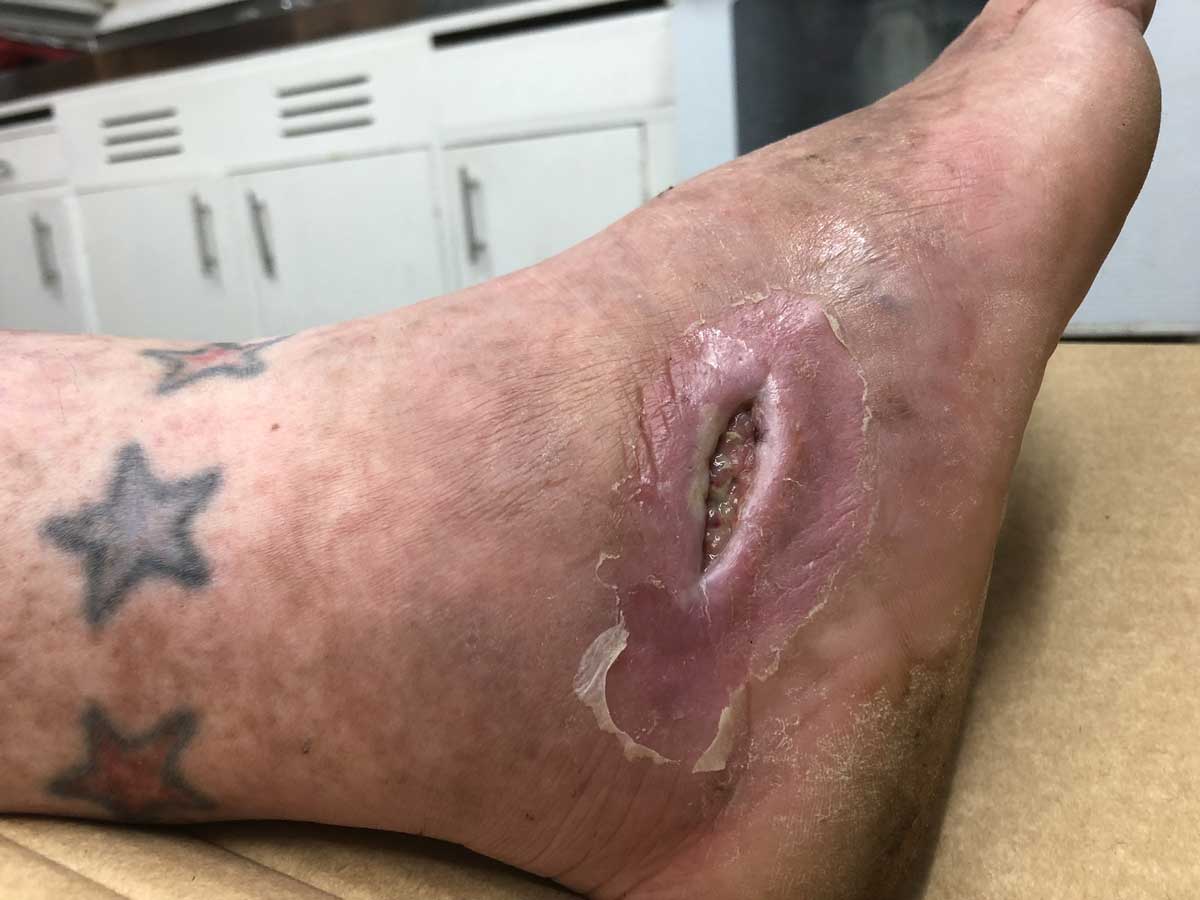 The objective is to saturate the skin with DHAA and vitamin C above and below the infection on arms and legs, without cross contaminating the infection site.

Mix 20 to 30 ml of DHAA Vitamin C Serum per 100 to 500ml of sterile water. We used "Pure Dew" as it is steam distilled, reverse osmosis filtered, and ozonised.

Always position wound uppermost and cover wound with a sterile tissue or sterile cotton cloth soaked in the solution. This is necessary to prevent cross contamination during this procedure.

Dip large paper towels into the solution and wrap around limb from well above the infection and any associated erythema or infection lines to the end of the limb including fingers, toes, palms, and soles then saturate with solution. As the solution drips off replace by trickling the remainder of the solution over the paper towels.

The evaporation of the water content has a marked cooling effect. While not employed in this case, if you make ice from the sterile water and add to the solution, the cooling effect will be enhanced. Vitamin C is an analgesic and improves circulation. The combination analgesic, cooling, anti-inflamatory and improved circulation due to vitamin C explains the relief reported in the three subjects.

This treatment typically takes around half an hour, and often visibly reduces the severity and extent of erythema and swelling after a single session.

After soaking the wound remove the pad covering the infection site and clean the wound with sterile pad to remove any debris and exude then apply three or four drops of DHAA - Vitamin C of serum directly to the wound. The soak will often loosen dead tissue and coagulated matter and makes removal easier.

A little more serum mixed with a few drops of water is spread over the surrounding inflamed area, a wrap around bandage is used to secure a non stick dressing pad in place.

The liposomal vitamin C used in this case study was 15% vitamin C (as ascorbic acid) suspended in sunflower lecithin. One teaspoon was taken morning and night.

PLEASE NOTE: The above is the protocol we used in our case studies, we are not suggesting it as an alternative treatment for sepsis or Cellulitus or any other ailment. Always consult with a medical professional first and if you have any of the following symptoms, and have an infection, go to the Accident and Emergency Department of your nearest hospital immediately.